I’ve just received the Spigen Slim Armor case in the mail today. I’ve snapped a few pics of the Pixel XL because I have to tell you about it. I’m happy.

The Spigen case feels very sturdy. I think I would be able to drop it without a care in the world. It fits very snug and maintains the Pixel’s aesthetics. There are two colors available, black-on-black, and gunmetal-on-black — I chose the latter. I felt that having a 2-tone case mimicked the original styling of glass and metal. This is a two piece case, a TPU frame/body, providing a matte finish, with a polycarbonate wrapper. The two color variations are of that wrapper. There is a built in kickstand that feels a little flimsy, but definitely works. It will keep the phone propped up without an issue. Just pull it out with you need it, and snap it back into place when done.

I never expect perfection when it comes to cut-outs in cases, but damn these are perfect. The cut-out for the fingerprint sensor is chaffered at an angle of – let’s say – 45-degrees, landing on the phone with a millimeter of gap around the circumference of the sensor. That tiny gap gives a buffer of room to allow you to take advantage of the Move feature – to pull down the notification tray with the swipe of the finger on the sensor. Brilliant!

You can see from the photo above, the camera, LED flash, microphone, and laser for autofocus have beautiful precision cuts. I’ve tested the flash, and I’m pleased to inform you that there is no back flash anomaly to be seen. Many people are concerned about two things fitting their phone, the USB port and headphone jack. Let’s start with the USB Type-C port. I grabbed my Benson approved 1-Meter USB Type-C to A cable from Cable Matters and proceeded to plug that bad boy into my Pixel’s unmolested female port. The cable is slightly larger than that of the OEM, so it was better to try this one out. Not only does it have ample clearance, it fits so nicely that you would have thought the case and cable were manufactured together. It’s amazing – the little things in life right?

The speaker and microphone cut-outs on the bottom of the case are 100% spot on. I don’t think any case I’ve seen was so precise. That’s not the best part, though. The added thickness creates a ‘tunnel’ that helps amplify the bottom-firing speaker. I wasn’t the biggest fan of the speaker when I first heard it. But now there is a little more bass and volume to round out the listening experience. My previous device had dual front-facing speakers – a Nexus 6, the phone I used to take these quick snaps. The experience of those beautiful acoustic wonders is nearly impossible to match from a single speaker setup. With the addition of this case, color me impressed.

I don’t own a pair of headphones that had a fat headphone jack – I’m not as cool as those kids. But I think the cut-out is large enough to accommodate any oversized 3.5mm plug one would have as a public symbol of overcompensation.

Now that we cover all the holes we can stick things into, let’s move onto the lip. The lip of the case that is. The edges protrude maybe 1.5 mm providing a buffer between the face of the phone and the surface it it placed on – if it is being placed face down of course. That is a normal lip we see on cases.

Let’s talk kickstand. The kickstand is merely a bonus for me, but I am totally sold on it. It is very slim, and therefore very flimsy. But I wouldn’t worry about it breaking unless you slam you phone downwards against a surface while it’s propped up. The angle is a bit to ‘right-angle’ for me. I’d say it’s 70-degrees, so almost a right-angle.You can flip it upside-down to get a fantastic 20-degree angle. The only problem with the flip is that the volume buttons will be on the bottom. It’s no biggie – set volume, then flip. Again, this is a plus for me. You could also buy a stick-on kickstand from Spigen to add to any case.

Lastly, the buttons. It is hard for a case manufacture to made a case that covers the buttons, yet maintain the clickiness we all love. I had a Spigen Ultra Hybrid – or something – for my Nexus 6 which had buttons that pressed onto the original ones, and those were really alloying. This time, on the Slim Armor, Spigen nailed it. The power button is super clicky. You feel the travel. The volume buttons aren’t that great without a case, so they aren’t great with one. But they feel fine. Overall, I feel like I’ve struck gold with with case. Now all Spigen needs to do is offer various color polycarbonate shells we can swap out!

How to Unlock the Nexus 5X Bootloader 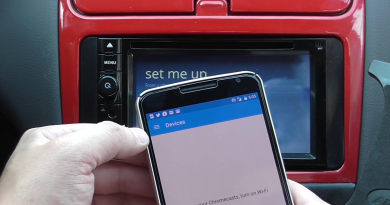 How to install Chromecast in your Car – Android Auto Alternative?